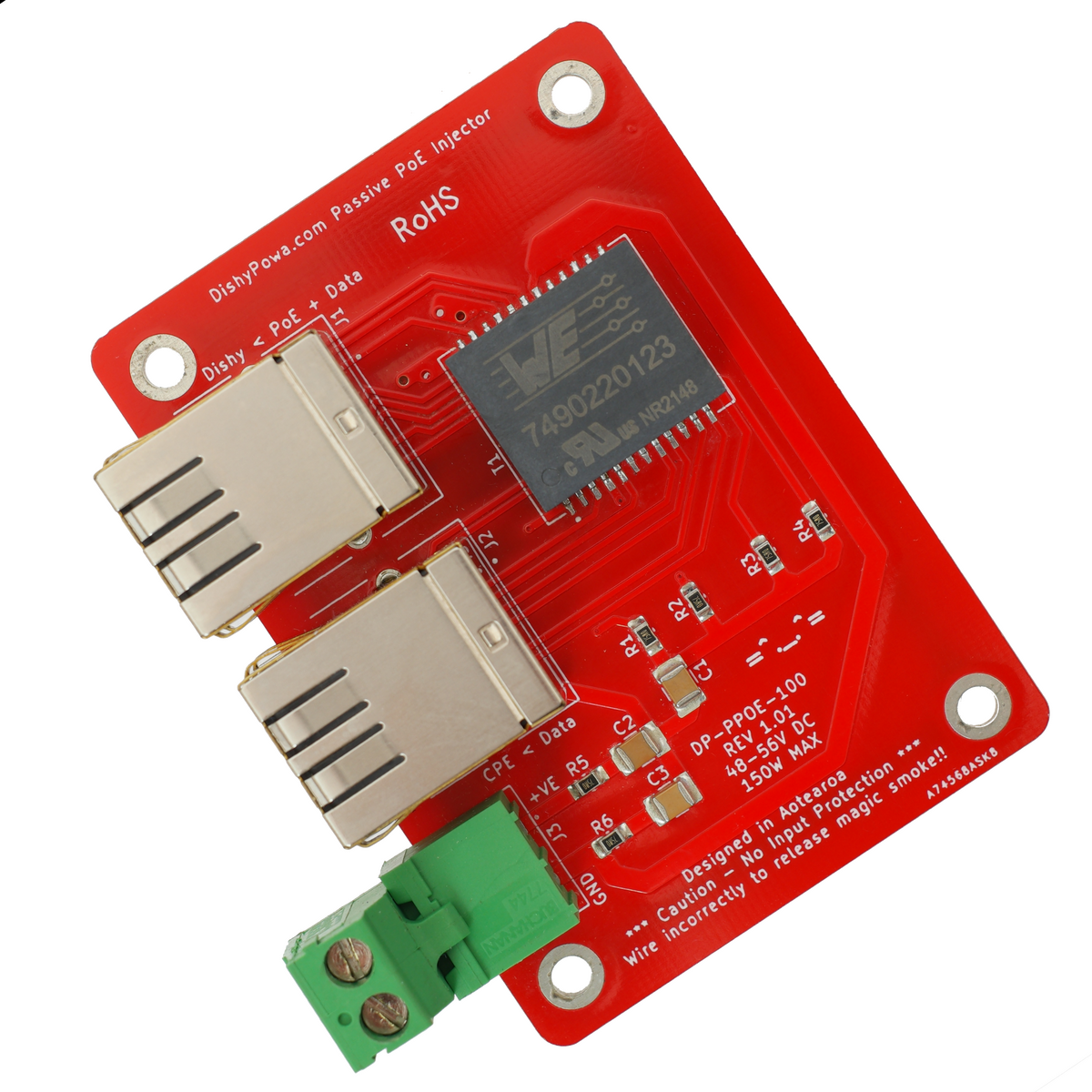 Welcome to DishyPowa, the 48-56V DC passive PoE injector for Starlink Dishy.This passive PoE injector is designed for use in remote locations, telco style installs, and off-grid setups, where you wish to replace the mains AC power injector (UTP-201A / UTP-201S) for Circular Dishy or the mains AC Starlink Router for Square Dishy, and power Dishy directly from a DC Power Source.As Starlink Dishy uses a high power PoE injector (up to 180W @ 56V DC) with a non standard pinout, we needed to design our own injector rather than just picking one up 'off the shelf'.Thus DishyPowa was borne!(DishyPowa is a passive PoE injector, this means you also need your own 48-56V power supply or power source, if you have a 12V or 24V setup you will need to pair DishyPowa with a DC-DC power supply to step up the voltage).

While regular PoE / PoE+ uses 4 wires (2 pairs) high power PoE setups such as PoE++ (802.3bt) use all 8 wires (4 pairs), with pins 1 2 4 5 for +VE supply and 3 6 7 8 for -VE return.However in what we assume is intended to prevent customers using their own 3'rd party PoE injectors Starlink Dishy uses pins 1 2 3 6 for +VE and 4 5 7 8 for -VE.Given the OEM UTP-201 power supply from Starlink can provide up to 180W (2 pairs / at 56V 1.6A each), and the highest power off the shelf PoE++ (802.3bt) setup can only source 90-100W, it makes sense that Starlink would use a proprietary pinout to force customers to use only their approved power supply that can handle the higher current rating.An added bonus of Starlinks proprietary pinout / PoE design means that if you do connect a regular PoE injector it will 'short out' the PoE and thus not supply any power to Dishy, essentially disabling any 3'rd party injectors.In our use case Dishy is located on a hilltop away from mains power and we need to run Dishy off a 48V DC (56V DC) supply, as getting 240 VAC mains up the hilltop was not practical. (The rest of our telecoms equipment up the hilltop is also 48V DC).The design of the DishyPowa passive PoE injector is based on research into Starlink's PoE configuration by Eli Protiva on the Starlink Hacks facebook group. We simply designed a PCB for our own use to keep things neat and tidy.The PCB itself is designed to handle 150W of PoE at 48V DC which is sufficient for the 'Grey' Circular Dishy which normally consumes around 50-100W @ 56V DC but will spike at up to 180W During Bootup, Sky Scan, Firmware Updates and when in Snow Melt Mode. DishyPowa also works with Square Dishy, which only requires 100W @ 48V DC, although you will need to cut the Starlink connector off the Ethernet cable and terminate a standard Cat5E Sheilded RJ45 Jack in its placeOur design utilizes the Coilcraft WA8704-ALD Wurth Elektronik 7490220123 PoE Signal Path Transformer (magnetics module) which is specifically rated for 150W (2x 1.5A), this is a much higher power magnetics module than you will find in most PoE injectors for this reason (and is the highest power PoE module in production worldwide).While Circular Dishy has been observed to be operable in a voltage range of 40-56V DC, we recommend you use a minimum of 48V DC and preferably 56V DC power source with DishyPowa for Circular, as the higher voltage helps lower the current required on each pair. Square Dishy is happy with 48V DC. This keeps DishyPowa operating inside its design envelope.This product is intended for installation and use by telecommunications professionals and other similarly technically experienced users (who have a strong understanding of DC power systems). Improper installation and operation will likely damage your Starlink Dishy, and will not be covered by Starlink's warranty.DishyPowa REV 1.0x does not contain any input protection (voltage or reverse polarity) circuitry, if you wire this backwards the magic smoke will come out of Dishy.Further we do not warrant DishyPowa for any specific use cases, this is an experimental un-certified product. It is not approved by Starlink, use this at your own risk.For more information please see our Draft DishyPowa Rev 1.02 datasheet.

Because DishyPowa is a passive PoE injector and not a full PoE power supply, you will most likely need to pair DishyPowa with either a Mains AC to DC or DC power supply in order to power your Dishy.There are a lot of power supplies on the market, particularly in the DC to DC segment (boost converters) where certification is not required, these are often cheap low quality designs.We've found a lot of these "cheap" DC to DC boost converters either don't supply enough output current, cant respond fast enough Dishys frequent to load fluctuations, or don't have big enough smoothing capacitors on the load output. At best the results are poor throughput and erratic behavior (e.g. continual reboots) and at worst you could end up damaging Dishy.As such we've purchased a not-insignificant number power supplies, and are testing them with Dishy at our lab.We are load bank testing each power supply as well as field testing with Circular and Square Dishy, observing the power supplies performance using an oscilloscope (with current and voltage probes), while also observing network throughput performance on Dishy at the same time.We'll be publishing the results of our power supply testing here, with a list of recommended power supplies, as well as those to be avoided.

So you want a DishyPowa? Awesome 🎉We have now shipped DishyPowa V1 units out to everyone on the waitlist and a whole heap more... over 400 DishyPowa V1 and counting.DishyPowa V1 is now in general availability / in stock and shipping worldwide via DHL from our HQ in Aotearoa (New Zealand)V1 units are US$60 each and can be ordered via our portal at canhaz.dishypowa.com.Shipping to most countries (including North America) will be US$25 via DHL Express, full shipping rates can be found here.Please also bear in mind this started as 'personal hobby' project (that got a bit out of hand), we're not some big telco power supply OEM, we have day jobs etc and electronics design and manufacturing was not our specialty when we started.We're posting regular updates to our Telegram Group and Twitter as the design, manufacturing, and testing process progresses, so please follow us there to be notified of future availability.

Alternatively you can send us an email using the form below.

We'd like to thank the following people for their help with this project.Eli Protiva on the Starlink Hacks facebook group who published the Dishy PoE pinout, without this starting point we would never have come up with the design for DishyPowa.@Texas Instruments / Digi-Key for the Ti 802.3bt reference design we used as a base reference for our injector design.@john.geek.nz who published some handy teardowns of a Tycon passive PoE injector we used as part of our reference.@TequinDragon for the late night crash course in KiCad, help with the PCB design, component selection, and answering all our dumb questions at 3AM in the morning around board manufacturing.@xantracat for reviewing our PoE injector design, and pulling apart / cross referencing various PoE injectors to make sure our design was somewhat sane.@ElectricElecami for reviewing the semi final board design before manufacturing and providing lots of layout critique.